Today, Amazon is one of the biggest e-commerce websites in the world, and plenty of sellers who started out by selling products on Amazon as a hobby or startup have managed to build successful and profitable businesses on the platform. Some of these business owners are now looking to cash out and sell their companies to one of the dozens of Amazon aggregators. However, most people looking to sell their businesses in an acquisition deal with an aggregator don’t have access to reliable and accurate information regarding the requirements buyers have for acquisition targets or the structure of deals typically seen in this industry.

To help Amazon sellers better understand the market and make more informed decisions, Nuoptima specialists have talked to over 20 Amazon aggregators and gathered valuable information regarding all aspects of acquisitions. We will present the information we’ve collected and its meaning for the industry in a series of articles. The first article we published discussed the preferences and requirements of Amazon aggregators regarding acquisition targets, and you can find it here. This is the second article in the series, and it will talk about the typical structure of acquisition deals in the industry.

Minimum and maximum purchase prices in the industry 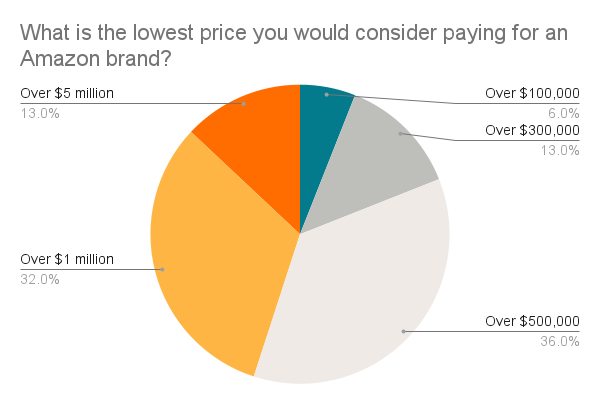 When it comes to Amazon brand acquisitions, price is naturally one of the crucial factors considered by brand owners and aggregators alike. Our conversations with players in the industry have revealed that most aggregators prefer to go after Amazon brands that cost at least $500,000 to $1 million to acquire. In comparison, only 6% of interviewees stated that they are willing to consider brands that cost $100,000 or more, and 13% of responders are looking to purchase companies worth $300,000 or more. The same proportion of interviewees mentioned they are targeting brands worth $5 million or more. Having said that, there is more competition for the larger size brands given there are fewer of them and while aggregators still consider brands below $1m in size, it is becoming less common.

Brands valued lower than $500,000 are often considered to be risky investments that are more likely to fail, thus reducing the number of aggregators willing to consider them. The amount of work required to do a deal, be it a $100,000 business or $10,000,000 is the same, and therefore there is a strong preference to do bigger deals. 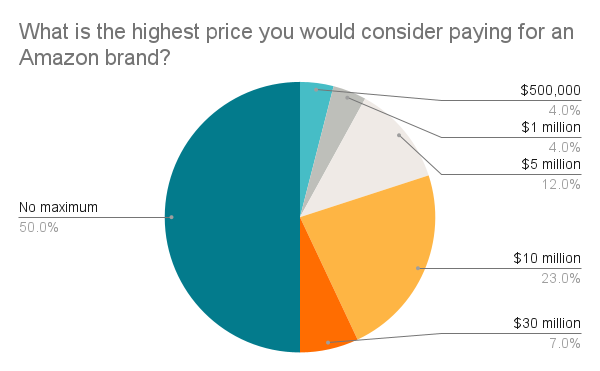 Interestingly, half of all interviewees stated that they do not have a maximum purchase limit, suggesting that they can raise as much capital as necessary if a suitable brand comes along. Another 43% of responders stated that they are open to acquiring brands valued at $10 million or less. This is expected, as larger brands are often too expensive for small to mid-sized aggregators who prefer to diversify their portfolios instead of investing a large percentage of their funds into one company. 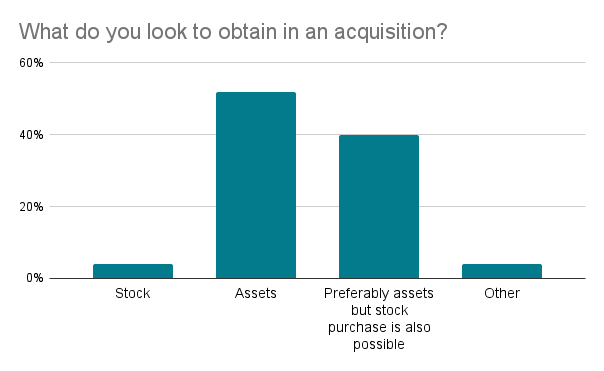 Our conversation-based insights show that an overwhelming majority of aggregators prefer to purchase assets owned by Amazon brands instead of acquiring the company itself. This is often significantly faster and easier than buying stock. Only 4% of interviewees mentioned they prefer to buy stock, while 40% of responders stated that they prefer to buy assets but may consider a stock purchase in certain situations. For instance, in some markets, aggregators acquire the legal entity instead of buying the company’s assets because of laws and regulations.
Buying assets is usually a faster undertaking with the legal documents being much simpler and less legal due diligence and headache when it comes to potential issues with employees or product liabilities from the past. 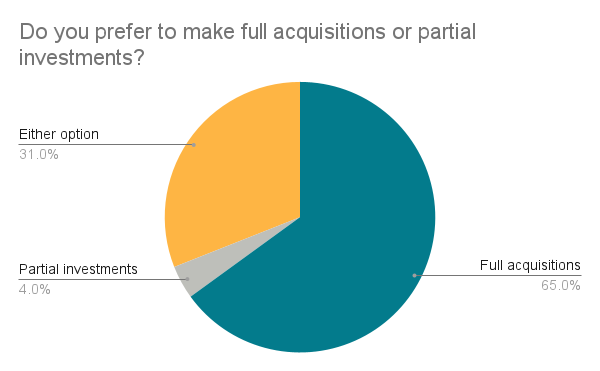 Our insights show that over 60% of aggregators prefer to acquire Amazon brands completely, while only 4% opt for partial investments. Roughly 30% of respondents were open to both options. This shows that generally, aggregators don’t believe they need the founder’s involvement to grow the business or make it more successful. Usually, acquisition deals involve a short transition period after which aggregators take over the company entirely and manage it the way they see fit. At the same time, the founder is free to engage in other ventures. However, some buyers prefer founders to retail a small portion of the business for a certain amount of time after the deal, as they believe this could increase the possibility of the venture becoming successful. 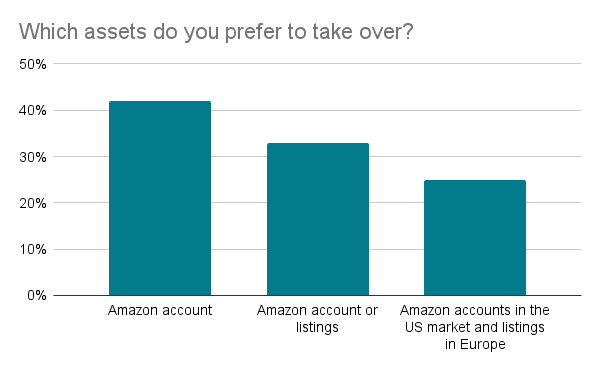 When it comes to the type of assets transferred during an acquisition, most buyers prefer to go with the fastest and easiest option that allows the business to continue running without interruptions. In most cases, changing the ownership of the account is the easiest option, as it can usually be completed in under a week without any additional checks or complications. However, in locations or situations where it’s faster to transfer listings, most buyers will choose this option. Important to understand that Amazon does not like the same entity owning multiple accounts so one has to pay a lot of attention to the migration of the account once purchased. 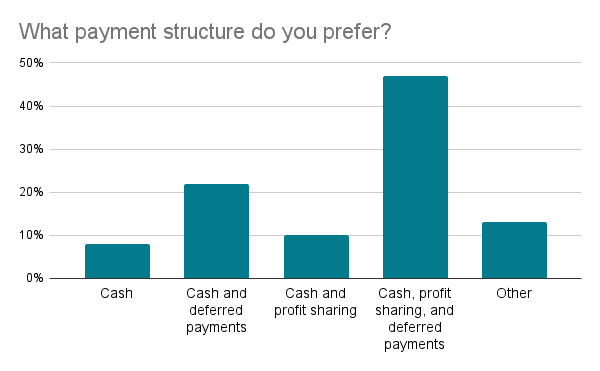 Most Amazon aggregators take steps to reduce the amount of risk they take on in an acquisition when negotiating an acquisition deal with a seller. This is often done by structuring deals to include deferred payments or profit sharing in addition to an upfront cash payment.

Almost 50% of the aggregators structure the deal as a combination of cash and deferred payments (earn out) and potentially profit sharing elements too. It is fairly rare to see to get all the cash and the seller being able to walk away completely. There might have been a few cases at the peak of the bubble at the end of 2020, but with a few aggregators feeling the pain and experiencing issues, the deal structures compare to many other industries now where it is a standard to have an earn out structure rather than to receive all cash upfront.

When it comes to the cash vs earn out structure, in most cases, around 70% of the total sum is paid in cash, while the remaining 30% is paid out to the seller at a later date as a deferred payment. This helps aggregators mitigate risks and reduce the chance of previously unknown factors causing the business to fail soon after the acquisition. General deferred payments or also earn-outs can be structured as a combination of achieving certain sales targets and can result in the outstanding payment to be made in 6 months time, 12 months, or 24 months time. There can also be further work around retaining the seller as a consultant and paying him or her a fee which could further be part of the total purchase price.

Over 10% of buyers are willing to work with sellers to develop other deal structures that benefit both parties.

When it comes to inventory payments, there are various combinations present too. From payment upfront to a big proportion of the inventory only being paid once sold (a consignment structure). In more than half of the deals, the inventory is added to the purchase price as an additional payment, however, sometimes a consignment deal can be struck or a time agreed when the inventory amount needs to be paid.

Given that a lot of the time there is some inventory in the Amazon warehouse, and the account is being transferred when the asset purchase price or shares purchase price agreement is signed, the legal agreement might differentiate between the inventory which is with Amazon (and therefore being also transferred with the Amazon account transfer to not overcomplicate things) and the inventory which sits in another warehouse or 3PL for which payment could be deferred. 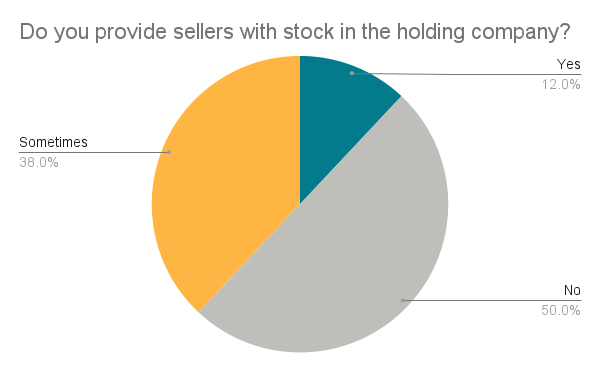 According to our market research, around half of all buyers offer sellers stock in the holding company as part of the acquisition deal. This practice carries numerous advantages and risks both for the sellers and the buyers. On the one hand, this allows buyers to use a smaller portion of their capital to acquire new businesses. On the other hand, aggregators dilute the company’s stock by offering sellers equity in the holding company. They can also face numerous legal complications as a result.

At the same time, sellers can benefit from this practice because they get a unique opportunity to invest in the holding company, which is unusually not accessible to the general public. It can further increase the upside for the seller. Equally, there is a risk of the aggregator not doing as well and therefore it becoming not as favorable for the seller as initially anticipated. 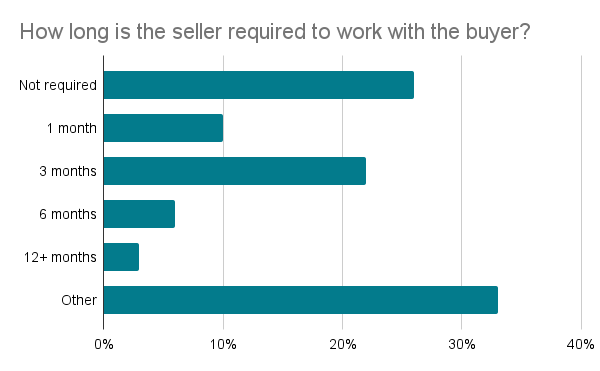 While many Amazon business owners believe that they will need to remain in business for a long time after selling it to an aggregator, this is usually not the case. For example, our conversation-based insights show that over 25% of buyers do not require sellers to remain in the business after the initial training and transition periods are completed. At the same time, 10% of responders stated that they prefer sellers to stay in business for 1 month, and a little over 20% of responders had a 3-month requirement.

This shows that buyers are generally confident in their capabilities when it comes to running businesses they acquire. At the same time, many interviewees mentioned that they make the decision about the seller’s involvement on a case-by-case basis, taking into account numerous factors.

All things considered, we can make a conclusion that buyers are looking to acquire successful businesses that have a proven track record of sales but can still be optimized to achieve rapid growth and increase profits. Most Amazon aggregators prefer to carry out acquisitions by buying the assets rather than the company. This is usually done through the easiest and fastest method, which typically requires the seller to transfer the ownership of their Amazon account rather than moving listings. Some buyers are open to giving equity in the holding company to sellers, but most aggregators don’t require sellers to remain in the business for any significant amount of time.

Talk to an Amazon expert

We work with 100+ businesses. Book a slot now to talk to one of our experts. 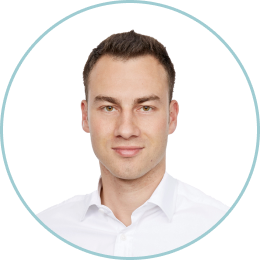 Alexej is the Co-Founder and CEO of Alphagreen Group, a global acquisition and incubation organization specialized in the health and wellness industry. He began his career in investment banking at Nomura before moving on to become a founding member of Delin Ventures, a venture capital arm investing in leading technology companies and VC funds. Alexej acquired board-level experience as an investor for a large-cap private equity fund before founding Alphagreen in 2019. The firm initially focused on CBD markets and then expanded to focus on all products related to pain, sleep, and anxiety management. The group leverages his interest and involvement in tech-enabled services and background in venture funding to deploy a 'hybrid aggregator business model' which helps brands to scale both locally and internationally. They achieve this through their own distribution channels, data science, growth agency and extensive external omni-channel network.

Amazon Insights
How to Protect Your Brand on Amazon?

How to avoid copyright infringement and others stealing your brand. Understand the best approach to protect your brand on Amazon